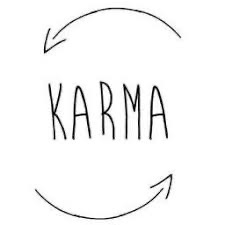 You see, Karma is a well-recognized concept that is not limited to situations. Why then would someone ask if karma really exists? I mean, you get heartbroken? We say “Don’t worry, Karma is a bitch. They’ll get what’s coming to them”. Did you get betrayed? Karma to the rescue. Do you have terrible governance? “Don’t worry, they’ll get what’s theirs”. But when has Karma ever really come through for us like the badass that we think she is?

When people refer to her, it’s basically just the law of what goes around, and comes back around. It’s just that when you call it “Karma”, it’s like you’ve evoked a spirit, a very strong one that’ll avenge you. But do people really get what they deserve? Or whatever happens to them, happens because it’s supposed to?

When I got my very first heartbreak (they’re plenty now, you don’t even want to know), like every typical person, of course, I was a total mess. Trust me, I did think they’d get what was coming to them because “my head would catch him”. Lol. Absolutely nothing happened and they’ve even experienced love more than I have. So, I’d like to ask why you think it exists.

So many times, I’ve trusted karma to do the job and hurt everyone who’s hurt me but then I realized somehow that what I really want to be true is non-existent. How many times have bad things happened to those who hurt you? Right. And how many times has it not happened? Many more times.

Life is not Nollywood neither is it a Cinderella story which entails the sisters not getting the prince because they are bad mannered and ugly. In reality, bad people don’t get unfortunate and good people are not always rich. It just happens the way it’s supposed to happen.

Yes, I’m saying karma is a sly who will never appear and you should either get revenge yourself or let it all go. I wouldn’t advise the first though because I’m not a supporter of violence.

So, what will you choose? Karma or reality?

‘Doing your best’ does NOT mean overworking

How to Stay Healthy while Working Remotely